Harmonics and the Fretless Bass Guitar

This week we are digging into the topic of harmonics. There are many definitions of the word, but the most appropriate one comes courtesy of Dictionary.com:

A note produced on a musical instrument as an overtone.

That leaves a lot of room to interpret, and it most certainly isn’t specific enough for anyone to know how the heck to do it, based on the definition alone. The purpose of this blog post is to walk through the three most common types of harmonics you’ll hear on fretless bass from a high level, with basic tips on how you can start to use them yourself.

This is not a technique that is unique to either fretted or fretless basses, but there are a couple of tricks you can add to spice up your harmonics if you prefer fretless like I do. I’ll cover those tricks as we discuss each type of harmonics.

Natural harmonics are the most commonly used technique for getting a bell-like ringing sound out of the heavier strings we use on basses. The technique behind them is actually quite simple – hold your left hand above where any fret would be on a normal bass, barely touching the string that you want to pluck. Then, pluck the string and simultaneously remove your finger from it, allowing only enough contact to partially mute the string’s vibration upon plucking.

If your timing is right, you will hear a nice “ping” sound followed by a ringing tintinnabulation. The best fret locati

ons to try this are the 12th, 7th, 9th and 5th. The harmonics you pluck at the 12th “fret” will ring out the same note you hear if you simply “fret” the neck there and pluck the string, although a much more bell-like version of it.

Some more advanced players can bring out natural harmonics at several other spots on the neck. The 4th “fret” is probably the next easiest location in the first octave (first 12 “frets”) of the bass neck. The same spots – 12th, 7th, etc. – can often be used one octave up on the neck to create a higher pitched natural harmonic sound.

Since there is no actual fingerboard involved in natural harmonics, they typically sound exactly the same on fretted and fretless bass guitars, all other components being equal (electronics, type of pickups, body material/wood, type of strings, etc.). The only exception is that, on fretless, you can pluck a natural harmonic, immediately hammer the string down to the neck at that same spot, and then add vibrato or slide that finger up/down the neck to create a very cool effect.

This technique results in a similar bell-like sound, albeit one that does not ring as purely and for as long as its natural brethren. It does use a similar principle, where you use your own finger to barely touch the string and create the nice ringing sound.

For tapped harmonics, you will literally be tapping the string a’la Billy Sheehan or Stuart Hamm, for those of you who have been around long enough to know both of them. The difference is that you actually “fret” somewhere lower on the neck, and tap lightly and quickly an octave higher. Through this technique, you always keep the lower note pressed down as a pivot. With the other hand, it is almost as though you bounce your tapping finger against the string with a little force, and then let it bounce back off the string to elicit the ring.

You can really get creative, particular when you start to mix in other cool techniques. Specific to the fretless bass, you can hold down the pivot finger in the lower octave, tap the harmonic note, and play around with slides, hammers, or pull offs. Depending on where you are on the neck, your hand strength, and even the angle of your hand, you can get some really interesting sounds here.

Also often referred to as “Artificial Harmonics“, particularly when used on an electric guitar, pinched harmonics provide a very different sound of attack as compared to the previous two examples. For this technique, you finger the lower/pivot note like you did on tapped harmonics. Then, using your right hand to both pluck and mute the string, you pick it at a spot that is one or two octaves higher than where your pivot finger is.

I’ve seen dozens of ways to make this work. For those of us who still use a pick (yep, some of us still do), you can get wanky like Zakk Wylde and let your thumb do the work. I prefer to hold the 3rd finger on my right hand straight for muting, hover it above the octave or two-octave “fret”, and pluck with my index finger. The only other way I ever do it is to use my thumb as the mute finger and pick with either the index or middle finger.

Pinched harmonics tend to have a lot of attack but much less sustain than the previous two types. It is best used for peppering in some quick “ping” sounds within the framework of a solo or phrase.

While this is a cool technique that will wow other bassists, it has rather limited use in western music like most of us play. I’ve found some great ways to blend it into world music and jazz, but only with adequate moderation. Regardless, if you get really good at this technique, you should be able to mix scales, slides, and a list of other techniques around and on top of pinched harmonics. At a minimum, all of the bassists in the room will enjoy it when you do!

Using Harmonics to Tune a Bass

I would be remiss to skip over how to tune a bass using harmonics. This is my favorite “by ear” tuning technique. Not only is it easier to hear in noisy places, like bars and clubs, but it makes the tuning process much easier as a whole. For the most common tuning approach, you match the note at the 5th string of one fret with the note of the next string plucked while open. This forces you to listen closely to be sure the notes match.

When you use harmonics to tune, you pluck two separate locations and listen for a wavering sound. Two harmonics out of tune will waver out of synch, and you will be able to hear it clearly. It has a similar effect to what a house fan does to your voice when you speak through it. But once the notes are in tune, the wavering completely stops!

To tune this way, you need two natural harmonics at a time. Start by tuning the A string using whatever method you prefer to do so (by ear, tune to another instrument, etc.). Then, pluck natural harmonics at the 5th fret on the E string and the 7th fret on the A string. Retune the E string until the wavering stops. Do the same thing for the A and D, and then D and G strings next. Since 6- and 7-string basses tune to 5ths all the way (as opposed to guitars, which have an odd half-step change on the B string), this technique should work on any commercially available bass in standard tuning.

Harmonics can really add a nice melodic tone to any sort of music if used properly. Now that you see the techniques and where each is most suited, you should be able to start playing around with the various types on your own material. If this is new to you, take time to catch up on it. The more tricks you can pull out on stage or in the studio, the more you will be able to express yourself and bring the sound in your head to life with your hands.

Have you heard any stellar yet unknown uses of harmonics? Hook us up with some links or artist names in the comments so we can go check them out! 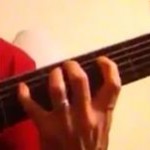 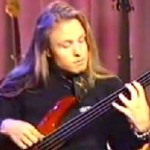 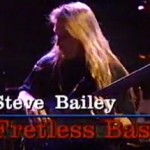