Thanks to all of you who forwarded me positive feedback after I published my interview with Michael Manring earlier this year. Today, we bring you an interview with another favorite: Steve Lawson. The timing of this post was carefully chosen, as today he releases his newest album, 11 Reasons Why 3 is Greater than Everything (available on his website TODAY). 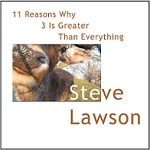 Steve was kind enough to share a preview of the CD with me, and I must say, the playing is as elaborate and melodic as ever. The CD is mostly ambient and down-tempo, primarily composed of one-take basslines. I especially enjoyed track 10, “Minor Miracles”, which is uplifting and bright in mood. He also showed off some great chops and layered bass tones on several other tracks, including distorted basslines, echo/delay (in particular on track 4 which has a Steve Roach like sound to it), and some sweet sliding artificial harmonics.

Once I can absorb the CD more fully, I’ll do a more thorough write up. But just know, it’s worth your time to give this 80-minute work of art a listen. On that note, on to the interview…

What was it that originally drove you to take up fretless?

It was a bit of an accident actually! I actively avoided fretless for many years, feeling like everything that I’d want to do on the instrument was already being done by Pino… His was my ideal fretless sound, and I didn’t think at the time I could add anything to it.

But then I was doing an album session that required fretless, at the same time that I was writing for Bassist Magazine and Modulus were sending me one of their VJ4 fretless basses. It was literally delivered to the studio, I pulled it out of the case, tuned it up, plugged it in and started recording… I kept most of the lines on that one pretty simple! But as a result of that session, fell in love with the expressive potential of the instrument, and – as anyone else could’ve told you would happen – I didn’t end up sounding anything like Pino. I sounded like me playing fretless 🙂

I noticed you do most of your work on 6-string Modulus basses, one each of fretless and fretted. What factors most influence which type of instrument you select for any given song?

I tend to write music on the instrument, rather than choose an instrument for pre-written music, so the relationship between the two is more one of symbiosis than ‘correct choice’.

I favour the fretless for most things – largely because it’s the bass I chose to tour with when touring with only one bass, which by default made that my primary voice.

But I love the change in colour and emotional resonance that happens when I switch to the fretted 6. I would say though that the difference between the fretless having flatwound strings on it and the fretted having roundwounds is probably almost as big as the fretted/fretless switch – I like to contrast the two.

There are two tracks on my new album (11 Reasons Why 3 Is Greater Than Everything: out on May 18th at http://music.stevelawson.net ) – called Small Marvels and Minor Miracles – that are two alternate approaches to the same chord progression, one fretted one fretless. It’s the clearest example of the difference in tonality between the two.

You do a lot of interesting melodic and textured pieces, mixing techniques, chords, etc. How did you develop your unique approach to the instrument?

Initially, it was a desire to experiment combined with a decision to pursue my broader musical vision solely via the bass. I was presented at college with the alternative of learning lots of instruments, but that really didn’t appeal [to me]. So I started to look at how the bass filled the various roles in the music I was hearing in my head. Initially, I experimented a lot with two handed chords-plus-melody type playing, but found that largely, I ended up sounding like two mediocre bassists [doing a duet]. It looked great, but it sounded more like a circus trick than a way of communicating music…

Discovering looping via an interview in Bass Player with Michael Manring was a real turning point – suddenly, I could envisage playing all those parts expressively and individually, rather than simultaneously on one bass neck. So I was then able to add a whole load of nuance and depth to the kind of textures I was exploring, and focus a lot more energy on my melodic playing.

I also focused on learning each of those elements from the people who did them best, rather than from other bassists. So for melodies, I looked to singers and sax players, for chordal playing to guitarists and pianists, for textural stuff to keyboard players and soundtrack composers. It never made any sense to me to look at instrument-specific examples of each of those elements, when the music is always bigger than the particular vehicle.

When composing music, what is your preferred creative thought process? Or do  you attack each song from a unique angle?

It varies a lot, and I try to avoid thinking too deeply about it in order to keep the process fluid and natural, but I very rarely ever write anything before hitting record. It may be that I go back and re-take things, but the vast majority of the inspiration to play succinctly and with purpose comes from the record light.

So my practice process is all about building towards that – I tend not to do ‘drills’ in the traditional scales-to-a-metronome way. Almost all of my practice is built around actively building my harmonic and melodic vocabulary and deepening my relationship with tone and rhythm, within the context of ‘actual music’ – I set up some kind of context, be it a loop of some ambient sounds in a particular key, or a drum track that I’m working on a groove idea to. I move from idea to context to measurable creative output as soon as possible…

You contribute content to a variety of publications and websites. How did that come to pass?

My first ever bit of writing was doing CD revues for a couple of small UK magazines. Then in about 1997, I ran into the editor of Bassist Magazine in the UK, in shop, and offered to write reviews of effects processing and hi-tech stuff for them. I was already a subscriber so knew that there was a hole in that area for them. I wrote one piece – a review of an ART Nightbass processor, and they liked it and asked me to do more. I ended up doing a lot of gear reviews, interviews and a number of columns based on my teaching work.

Transitioning from writing for magazines to writing for the web seemed obvious – my own site become a hub for my writing – first as a news page, and then as a blog. When Talkbass.com first set up, I was asked if I wanted to host an ‘ask the pros’ forum with Michael Manring, addressing some of the specific kinds of questions that people looking at bass as a solo instrument might come across. It was a lot of fun, though the activity there has tailed off as most of my conversations about music have shifted to either Twitter, Facebook or my blog.

Much like friend of the”Hub” Mr. Michael Manring, you are more involved with your fan community than most musicians. Of course, many of the members of the community are also bassists, but what is it that other musicians are not “getting” about participating in the conversation actively?

There seems to be, within some sectors of the music industries, a reluctance amongst musicians to dispel the myths about their own super-importance. We’ve been told for the last 40 years that rock stars are super-human beings with special skills who for some reason get a pass on actually being reasonable, functioning people. We get used to musicians being aloof, narcissistic and self-important, and somehow assume that that’s what a musician ‘should’ do. That to be is truly bizarre.

A big part of the meaningful validation of what I do as a musician is the sense I get that my audience are people I’d more often that not want to go to dinner with and find out all about. My music tends to draw together a really interesting cross-section of people, and having the chance to chat to them and meet with them isn’t a ‘marketing strategy’. It’s a way of enriching my own life based on the generosity of the people who have somehow found out about the music I make and have connected with it. It’s far more the case that my audience are generous to me with their time than the other way round. If people appreciate getting to talk with me and sharing some of my journey towards making better music, then it’s win/win!

What is one “golden nugget” of advice that all aspiring bass players should hear, perhaps something you wish someone told you earlier in your career?

Try not to worry about finding ‘the big thing’ – whether it be a way to play, a technique, a piece of gear, an influence, a way into being a pro, a secret of making awesome music… there is no big thing.

The whole process of connecting with music and then with the world through that music is a life-long journey, and every seemingly big leap is just another step on that journey. The eureka moments still need processing and applying in a meaningful way, and there’s no short-cut for just doing it.

It doesn’t require special divine inspiration to get good at music, it just takes a commitment to learning about the process and focusing on the things that matter. Read all about that process and never judge the way you feel on the inside about your music by the way that someone else projects on the outside how they feel about their music. You’re doing fine. Go practice.